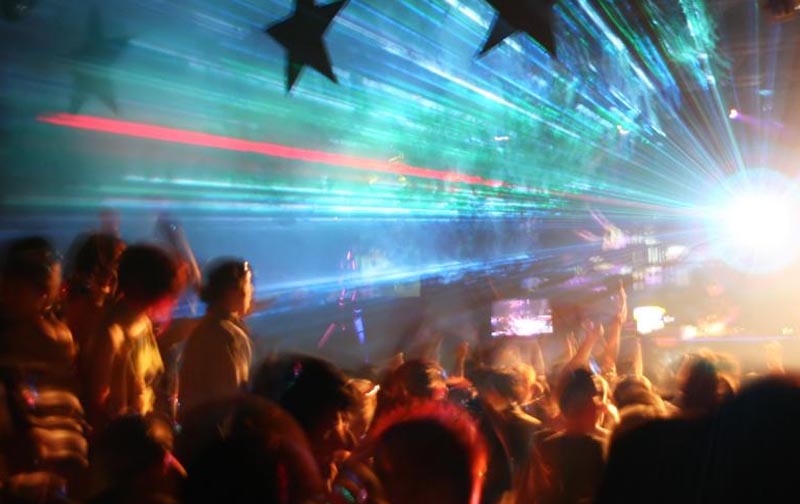 If you like late nights, then you can be out enjoying yourself through to breakfast time in Benalmádena; one of the Costa del Sol’s great party destinations with a huge variety of clubs, discos, pubs and entertainment venues catering for all ages and tastes.

Most famous, infamous even, is Plaza Solymar – which everyone knows as ’24 Hour Square’. This raucous area does exactly what it says on the tin.

It’s not everyone’s idea of fun, but young and mostly British tourists flock here in summer. Touts direct them into bars with offers of cheap, even free alcohol; around midnight many will roll out and into the clubs, among which Kiu, with its four large different style dance areas, is legendary. It’s the port of call for many stags and hens celebrating. Outside of high season there is a more relaxed atmosphere.

Between Benalmádena Costa and Arroyo de la Miel, Bonanza Square has a more family friendly vibe in its bars and El Elefante has been operating as one of the most successful entertainment venues on the coast for many, many years. It offers a programme that features familiar faces with top UK comedians, chart hit bands, ‘Stars in their Eyes’ singers, as well as other variety and cabaret acts, 7 nights a week. For ‘Las Vegas’ style shows and flamenco, Torrequebrada Casino, along the seafront in Los Boliches/Fuengirola direction, stages dinner and entertainment evenings for something a little special.

If it is cocktails and clubs in a more glamorous and upmarket location than 24-hour-square you seek, head to the marina (Puerto Deportivo) along Calle Levante. Many establishments have terraces where you can look out over this large and beautifully designed commercial and residential development with expensive yachts and motor launches moored in its harbour. Spanish couples and singles descend at the weekend and Latin salsa is strongly featured in venues such as La Cubana. Discoteca Aqa is loud and lively with guest DJs and there are many others to try. There is novelty too. Disco-café Kaleido boasts a gigantic aquarium filled with tropical fish and at Boal’s Ice Bar guests are kitted with hats, socks and gloves for an authentic ‘chill out’.

If you are a night owl but prefer the pace to be less frantic, find a favourite bar that stays open till you leave. There are many Spanish cafes and bars that enjoy late opening, especially in the summer months, and look out for tablaos and peñas if you like to catch a flamenco performance, though shows here are tailored for a tourist audience.