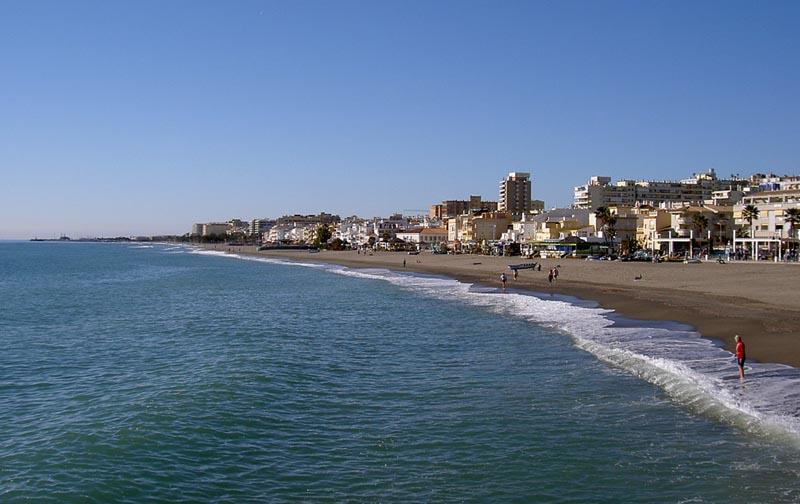 In the mid-20th Century La Carihuela was simply a small fishing village with fishermen’s shacks and just a couple of streets behind its broad, sandy beach.

Today it lies squeezed between spreading Benalmádena and busy Torremolinos, and while much grown and diversified it remains a destination filled with character and charm.

There are still a few folk who fish, colourful boats dot the beach, and the old village centre, mostly rebuilt but keeping largely a low-rise skyline, is pedestrianised and lined with shops and restaurants.

It is famous throughout Spain for its fish restaurants and come the weekend Spanish families flock here to enjoy its signature ‘pescaito’ (small, white fried fish), among other seafood dishes. While many such establishments are to be found along the seafront promenade, La Carihuela also has cafes, restaurants and bars to suit everyone serving a variety of cuisines.

Although La Carihuela has seen many hotels and apartments arrive to cater for its growing popularity since the 1960s, particularly with Dutch and English holidaymakers, it still has a village feel and its small shops and bars create a lively and fun atmosphere.

Before the advent of the package holiday it was a playground for rich and famous celebrities; most infamously Frank Sinatra who was arrested here at La Carihuela’s then first luxury hotel: the Pez Espada, which over the years catered for more budget conscious clients and its tall tower can still be seen today.

It is one of several hotels that add to La Carihuela’s ‘story’, among them the Hotel Residencia Miami on Calle Aladino is worth taking a peek at. Originally the home of a well-known gypsy queen and flamenco dancer from Granada, called Lola Medina, it was designed and decorated in around 1950 by Manolo Blascos, a cousin of Picasso.

Artists and intellectuals would gather there and Lola would dance to entertain her guests. From 1957 it became a hotel, with modifications made over the years. However, it is notable for its Andalucian architecture and preserved features, which include a pretty, walled garden.

One of the key attractions of La Carihuela is the 2.1km long clean beach; which stretches from La Bajondillo beach, Torremolinos town, to Benalmádena Port. The beach shack restaurants have given way to smarter – as well as more comfortable and pricier – places to sit and watch the world go by; developing in tune with changing holidaymaker demands.

For a blast of the past, traditional festivities continue to thrive and in mid July La Carihuela celebrates the Feria Virgen del Carmen, its streets packed with people to witness a statue of Carmen (aka Virgin Mary) being carried out to sea and borne away amid an illuminated flotilla of boats.

To reach La Carihuela by car, travel in the Malaga direction on the A7 following the Benalmádena Costa coast road through Benalmádena toward Torremolinos, and it is signposted off. You can also easily go by bus or taxi.