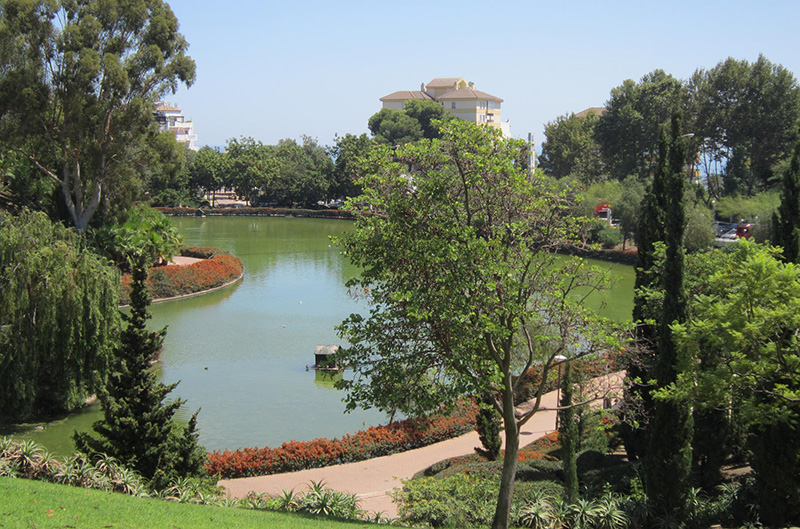 There is a place you can escape to that feels a million miles from the commercialism of the coast, and yet it is set right at the heart of the thriving holiday centre of Benalmádena and it is called Paloma Park.

From the main coast road it is a few hundred metres in the direction of Arroyo de la Miel, and it offers a day out for the family that is not only free but just as memorable and fun as many other paid attractions on offer.

The park has a large lake, ornamental water features and a children’s playground with climbing frames and adventure activity equipment. That’s just for starters! Designed and created in the 1980s, the landscaping with its many shade-giving trees is ideal for picnics, and there is an abundance of wildlife to watch out for!

A large resident bird population includes many ducks, geese, swans, chickens and peacocks, along with turtles and fish at the lake. There is also a closed area with emus and mountain goats. Many of the creatures run wild and you may fall across the odd rabbit or two scurrying in the undergrowth.

Covering 200,000m2 this is a large urban park with cafes to stop off for refreshments, and a cacti garden to marvel at with over 450 species of these strange, spiky plants. There is also an auditorium, where musical events staged by the Town Hall are held in summer months.

Most folk like to take their time and stroll, but you can also choose pedal power and hire a canopied bicycle cab to get around. Opening times are daily from 0900 to 2200 in winter and until 2300 in summer; on Wednesday mornings you may find a car boot sale taking place.

Paloma is Spanish for both pigeon and dove, there are certainly many of the former to be seen at the park which is considered the perfect ‘des res’ by flocks of feathered friends. For a peaceful escape with plenty of nature to observe, the park takes some beating.